I don’t know if I mentioned this in a blog before, but we actually have two dogs.  Most of the time, on my Instagram or my blog, you will see this adorable face.

But I have another pup too, named Loco, and if you are one of my new followers, you might not know about him. 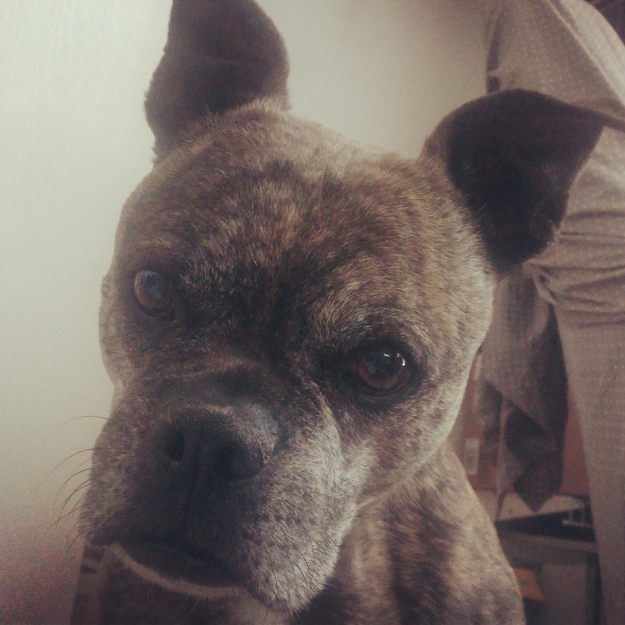 The reason he hasn’t graced the posts of my blog lately is that he is very sick.  Last summer, he was diagnosed with cataracts and some arthritis.  Being a 13-year-old Boxer mix, this wasn’t really any cause for alarm.  But over the rest of the year, he started to decline.  He stumbled more and took a tumble on the stairs (he was fine), but after that, we decided it would be better for him to stay on the first floor.  He would have all access to the doggie door, plus his food and water, and a nice bed (or even the couch if he wanted).

But then he started to decline even more.  At the beginning of the holiday season, he started having accidents in the house.  And then they became more and more frequent.  We sequestered him to an oversized crate while inside and then would put him outside during the day.  We even moved the food and water outside, and a large bed for him to use.

And then he started losing weight.  We added a can of wet food to his dry food every morning, but it wasn’t helping.  Finally, this month, we took him to the vet.  In addition to being blind, he is also now deaf, and his arthritis is worse.  The biggest issue is that his kidneys are not doing well.  And right now, he’s on special food and taking medicine every day.  He’s going back to the vet this weekend, and if his numbers are still declining, it may be time to say goodbye to our lovable boxer.

I don’t know what I wish for in this situation.  Of course, I would love to have my buddy around forever, but I don’t want him to suffer or be in pain.  He’s lived a long life and been such a good dog, not only to me and Michael but to his previous owners as well.  But I’m so tired of dealing with death, in any context.  Loco is a part of our family, and we have had to say goodbye to family so many times over the last couple of years – both of our daughters and my grandpa.  It’s a hard position to be in, but I know that God will give us peace with whatever is about to come next.

So, if you are the praying type, please pray for our Loco.  And pray for us.  Pray that we can do the best for this wonderful dog.

Have you ever lost a dog?  Have you had to take care of an elderly sick dog?

7 thoughts on “The Other Dog”