As I was reading about Rachel and Leah for last month’s series, I was fascinated how all of their children (and their descendants) turned out.  As a kid growing up in the church, I got a lot of the sanitized highlights about this family, and Judah and Tamar were left out, understandably.

So, after Judah and his brothers sell their brother, Joseph, into slavery (Genesis 37), to the Midianites no less, he travels way south from Dothan to live in Adullam with his friend Hirah. 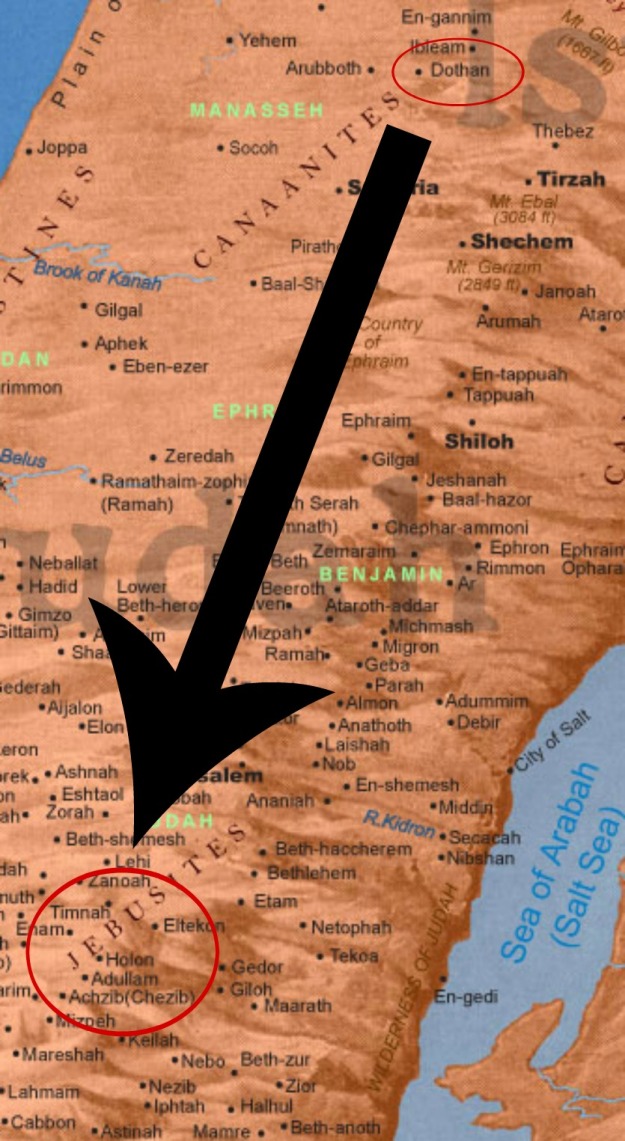 This is far away from any of his family’s influence.  There he meets a Canaanite woman whose father’s name was Shua.  They don’t mention her name, though.  I guess he didn’t learn from his uncle Esau, and he marries her and has three sons, Er, Onan and Shelah.

When Er grows up, Judah sets him up with another woman from that area, Tamar.  But Er was evil.  Doesn’t say why he’s evil, but it’s enough that God puts him to death.  Since Tamar is left a childless widow, Judah offers his second-born, Onan.  This will actually become a commandment found in Deuteronomy 25:5.  It is meant to carry on the legacy of the firstborn, but Onan was having none of that.  When he and Tamar become intimate, he basically pulls out to make sure he doesn’t get her pregnant.  This angered God, and Onan also dies.

I don’t know if Judah knew what was going on with the deaths of his sons, but he was afraid for his third, and last, child, Shelah.  So he convinces Tamar to go back and live as a widow at her father’s house until Shelah grows up and tried to buy some time.  So Tamar does.

Then after “a long time,” Judah’s wife dies.  After some time grieving, he goes back to work.  He and Hirah plan a business trip to Timnah.  On their way, they pass through a place called Enaim.  Tamar, at this point, knows that Shelah has grown up.  So, she takes off her widow’s clothes and puts on a veil, disguising herself and also goes to Enaim.  Maybe she wanted to confront him, maybe what happens was her plan all along.  But at any rate, Judah sees her, thinks she is a prostitute and sleeps with her.

Before he sleeps with her, they bargain for payment.  And the conversation goes like this:

Tamar: How much you got?

Judah: I got a young goat back where we are staying, I can send that to you after.

Tamar: You got something on you that I can take as collateral?

Tamar: What about your seal, cord, and staff?

Of course, the conversation wasn’t that exactly, but pretty much.  So they sleep together, and then she goes back to her father’s house and wears her widow’s clothes again.  Judah sends his friend Hirah with the young goat to find the prostitute, but she’s gone.  And when Hirah asks around, the townspeople said that there were no prostitutes around that area.  Judah is afraid that he has been duped, and he doesn’t want to be found out, so he just counts the seal, cord, and staff as a loss and moves on with his business trip.

Three months later, Judah gets word that Tamar is pregnant, and that she has been guilty of prostitution.  Maybe Judah thought this was an answer to a prayer for his son Shelah. Because now Shelah wouldn’t be obligated to marry her and possibly end up like his other two sons.  He recommends that Tamar burns for her sin.  But that’s when Tamar produces the seal, cord, and staff.  Judah recognizes his own collateral and realizes that she was the mysterious prostitute in Enaim.

He also realizes how poor his decisions were.  If he had allowed Shelah to honor the legacy and produce a son with Tamar, none of this would have happened.  If he hadn’t elicited a prostitute, none of this would have happened.  But when he realizes his mistakes, he owns up to them.  But he doesn’t marry Tamar.  In fact, he never sleeps with her again.  But he does recognize the twin boys that she has, Perez and Zerah.  And Perez’s line produces key players in God’s plan, including King David and Jesus Christ.  In fact, Tamar’s name is included in the genealogy of Jesus in Matthew 1.

My takeaway from this is that people make mistakes, even the people God includes in his plan.  They make poor choices based on fear or lust, selfishness or pride.  But the best thing they can do is own up to those mistakes and accept the consequences.  God doesn’t call us to be perfect or to make every right choice.  He calls us to be faithful and to trust in him.  And even through the consequences, even through the imperfections, God is walking through it with us.

He is bigger than my fear of a future unknown.  He makes all things new and builds legacies in ways that are beyond my cultural understanding.  He sees the big picture and wants the best for me.  And in this, I place my hope and trust.

2 thoughts on “Between the Lines: Judah and Tamar”