I foster dogs as a behavior foster for the SPCA.  Typically, I work with socialization cases, cases where the dog hasn’t had much interaction with humans.  But when there aren’t any of those cases, sometimes I pick other needs or behavior issues that need to be addressed through fostering. I know, I’m in trouble.  This dog is so cute, and he knows it.  He’s in fostering because he’s too young to go through the neuter surgery and too young for some vaccinations.  But he’s also a bit of a punk as well.  Apparently, he had other fosters who were unable to keep him because of his behavior. He needed to learn boundaries with other dogs, which my dogs are excellent boundary teachers.  He also needed to have some boundaries with humans as well.  He’s what we call spoiled, which is totally understandable with that little face. He’s actually coming along quite nicely.  The dogs have put him in his place.  He isn’t barking at everything anymore.  While he used to chew everything in sight, he is spending more time with the doggie bone instead.  And he will even allow us to put him in his crate without constant crying to come out.  (Although when I do let him out, he goes running straight into me, burying his head in my shirt or my neck, or making his home in my lap.) 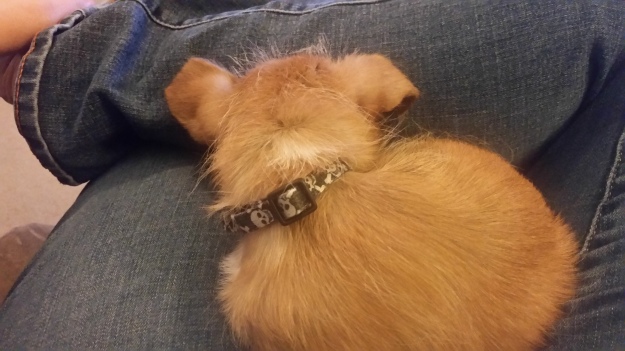 I still spoil him.  He spends a lot of time in my lap (in fact he is there right now).  And I carry him around at times (although that’s mostly to keep an eye on him while I need to do something else). He will definitely be a hard one to say goodbye too, but I’m sure he will find a home right away.  I mean, how could he not?

Have you fostered any dogs?  What are some ways to make the parting easier at the end of the foster time?  I might need advice for this one!