The final chapter of the final book of my summer study.  I can’t believe I’ve already arrived here.  This has been fun, fascinating, convicting, and amazing.  So let’s get into chapter 4 of Philippians! 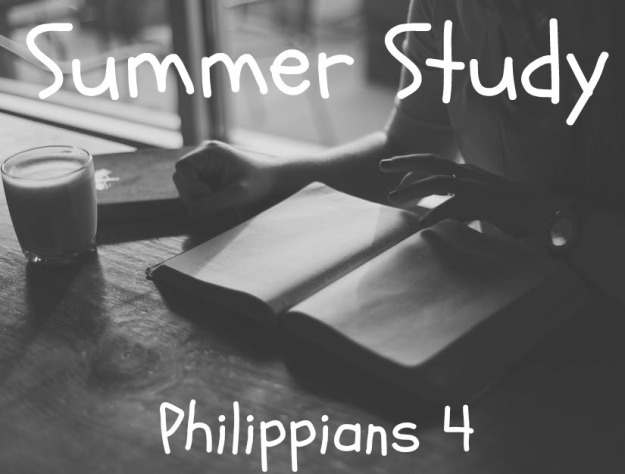 In this final chapter, Paul is saying his farewells.  In this letter, he’s covered how to remember the big picture, of the spiritual warfare that is prevalent though unseen, how to stand firm but be humble, knowing that we don’t have it all figured out.  But instead stay steadfast in Christ.  He continues along these lines pleading with specific people to stop fighting and unify for the sake of the kingdom.

But if I were to boil down the last chapter into one word, it would be “contentment”.  And there were two things that Paul felt would help the people of this church find contentment.  Praying with thanksgiving (meaning asking requests to God in the same breath as thanking him for what you have already received) and leaning on the strength of God.

He even uses himself as an example.  In whatever situation he is in, he has learned to be content.  But he also recognizes with thankfulness the generosity from this church that has enabled him to reach so many others.  But even in that gratitude, he acknowledges that his contentment comes with the help of his Heavenly Father.

Because it’s not always easy to be content in our circumstances.  And while gratitude journals or using other ways to instill gratitude into our lives is helpful, I think it’s also helpful to acknowledge that we are weak in our humanity.  We are not going to have this all figured out.  We are not going to be perfect, even through practice.  And when we come up short, God’s grace and strength can fill in the gap.

I don’t really like thinking of myself this way.  Weak.  Failure.  Chaos.  Fumbling.  I like to think that if I follow the rules long enough, make the right choices every time, and envelope myself in the right environment, that I will have it figured out.  But if anyone could have filled out that resume, it would be Paul.  And as I learned in chapter 2, he considered all of his abilities and gifts and strength rubbish compared to what God had.

And God knows this, and he wants to use this.  He’s like “Give me your weakness and I will give you my strength.”  Because he doesn’t want people who have it all figured out because those people’s followers will just want to follow those people.  But when our weakness is exposed and God’s strength shines through, the followers and onlookers see only God.

It lifts off some of that responsibility we try to hold on to.  I thought for years that it was my job to convert the hearts of others, but instead, I’ve learned that I just need to love them.  But in order to do that, I have to get that love from God, so I need to be in a relationship with him so that he fills me up with love to the point that it overflows to others in my life.  Hence, love God, love others.

Thank you so much for following me through this summer study.  It’s amazing the little things, little reminders, that shine through the text that I’ve read so many times before. I look forward to new things and ideas this fall!

It’s true.  Time seems to go so slowly until you get older.  Then, it just flies by.  Of course, I can’t actually slow time down, but last year I made a pact with myself to start living every second I have with purpose.

What purpose was that exactly?  I never felt completely called to one field or another.  I didn’t go to college knowing exactly what it was I wanted to do.  When I graduated, I didn’t feel pulled into one specific career.  I see that as an advantage, usually, but what, then, would be my purpose?

I believe my purpose is nestled in the two greatest rules of life (Matthew 22:34-40).  Love God.  Love others.  So, my first purpose was to race after a relationship with God before anything else on this earth.  My second purpose was to love those who God puts in my life with every fiber of my being.

The way I reflect that is in my planning.  Every colored moment on my calendar is a pursuit to one of those purposes.  It’s something I hope to continue in 2013.  That, to me, is living with intention.