I haven’t read this book series by Stephen King, and truthfully, when I walked into the theater, I had forgotten the series was by Stephen King.  I probably would have skipped it if I had known (I won’t even watch the IT trailer.  That thing scarred my childhood).  But I’m glad I didn’t. 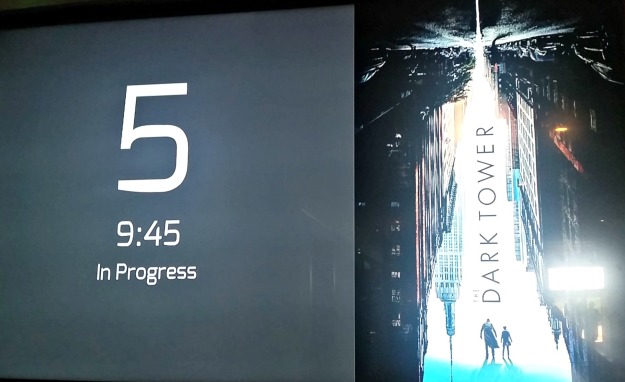 We went to the first showing at our favorite theater.  They were serving brunch and it was delicious.  It was also cheaper, as most first showings of the day usually are.  And it wasn’t that crowded either.

But the movie, itself, was phenomenal.  Talking to Michael afterward, we both agreed that if the Marvel and DC blockbusters didn’t play this summer, this would have easily been our favorite of the season.

The story follows this boy who is being haunted by these dreams of a dark tower, and a series of scenes that involve a man in black and a gunslinger.  Everyone thinks that they are just a reaction to trauma and loss in his own life.  But when the dreams become a reality, he goes on an adventure to another world in order to save his own.

It is not a scary movie, despite being based on a series of a very popular horror/thriller author.  To me, it was a straightforward, good vs bad adventure.  The plot was simple.  There were some graphic-ish scenes of violence, but not gory at all.  I’m thinking of one character who dies and you can see the hole on the forehead.  But no blood or guts.  The bad guy mostly killed by telling the person to stop breathing or by setting them on fire.  But you don’t see them on fire.

Idris Alba and Matthew McConaughey were amazing.  McConaughey wasn’t playing the kind of role I’m used to seeing from him, but he did really well.  It made me want to know more about the man in black, where he came from and why he was so bent on destroying the tower.  But perhaps that’s the point.  To get people to read the book series.

This was our last movie of the summer season, and I feel like we ended on a high note. On our way home in the car, we listed our favorites. It came in after Spider-man: Homecoming and Wonder Woman as a strong number three.  Definitely, a recommendation in the theaters or for a night at home.

1 thought on “The Dark Tower: A Review”