For our Valentine’s Date, Michael and I saw the new Marvel movie, Black Panther.  I’ve been stoked to see this movie since I saw the trailer back in the summer.  I know that there have been a lot of great articles out there that articulate the amazing things this movie has done and is doing for the black community, such as this one from the New York Times.  But for my review, I just want to share my two favorite things about the movie from my perspective as a Marvel Universe loving girl.  No spoilers, I promise. 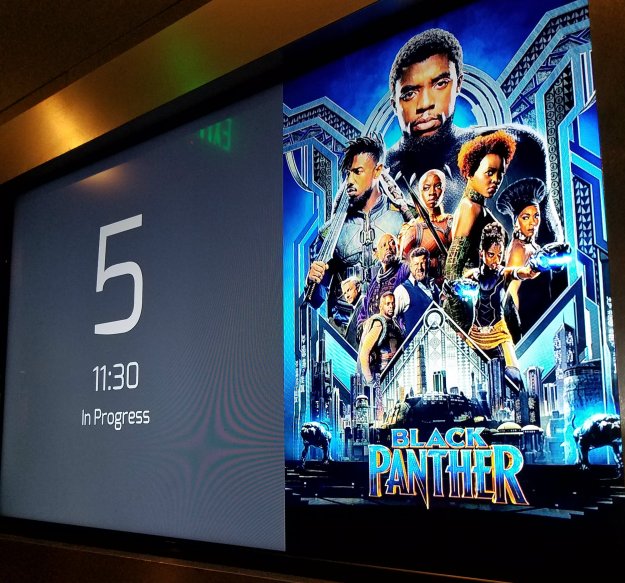 My first favorite thing is the women in this movie.  Last year, I thought DC had really cornered the market on the female representation with Wonder Woman, but in this movie, there were three fierce, beautiful, intelligent women who kicked butt.  I call them the soldier, the spy, and the scientist (because I love alliteration and it works).  And even though I loved their fight scenes, car chases, and attitudes, my favorite part was that they each held to their own convictions.  Throughout the film, they each get told in one way or another that they are naive, or that they are assumed to act a certain way (and this is coming out of an egalitarian society), but they stick to who they are and what they believe.  In the end, they each prove themselves by just being themselves.  I’m afraid that I can’t give too many specifics, though, because of spoilers.

The second favorite thing is the set design/cinematography.  The sweeping landscapes and deep, rich colors of Africa are pronounced throughout the film.  My absolute favorite set, though, was the throne room of the Jabari tribe.  A close second is the throne room in Wakanda.  But what I loved the most was the intertwining of the traditional with the technologically advanced.  When I think of futuristic cities, I usually imagine pristine, minimalist buildings.  But in Wakanda, you had what seemed ancient ruins mixed with hovercrafts.  There was a point in the movie where they showed a part of Wakanda where people were selling things in a market, and a hoverbus goes by.  I wanted to pause the movie and just get lost in all of the details – the ivy growing along the buildings, people communicating from their bracelets.  It was absolute perfection in a way I hadn’t thought of before.

Overall, I highly recommend the movie.  Like in most of the Marvel movies, there are amazing themes of redemption and mercy, understanding where people come from, and caring about the people around you and doing what’s right.  Definitely in my top five favorites in comic book movies of all time.

2 thoughts on “Black Panther: A Review”